IHCHR: An Iraqi army member killed while participating in the demonstrations in Baghdad

Shafaq News / The member of the Iraqi Independent Commission for Human Rights (IHCHR) , Ali al-Bayati announced on Wednesday that an Iraqi army member were killed while participating in the protests in the center of the capital, Baghdad, while on vacation.

Al-Bayati said in a statement today, "Fahd Mahmoud Al-Khuzai from al- Shamiya area in Diwaniya is affiliated with the Iraqi army and participated with the popular mobilization forces against ISIS."

He added that Al-Khuzai was killed "in Baghdad in Al-Khilani Square yesterday while he was participating in the demonstrations by live bullets."

On Tuesday, IHCHR announced that 545 people were killed and 24,000 injured, during violence that accompanied popular protests since the beginning of October 2019.

Amnesty International said yesterday that the death toll among protesters in Iraq has exceeded 600 since the protests began in early October.

Source: This is the number of deaths in Dhi Qar recent events not disclosed by the government 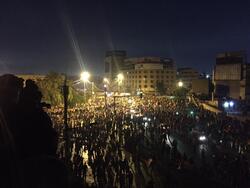