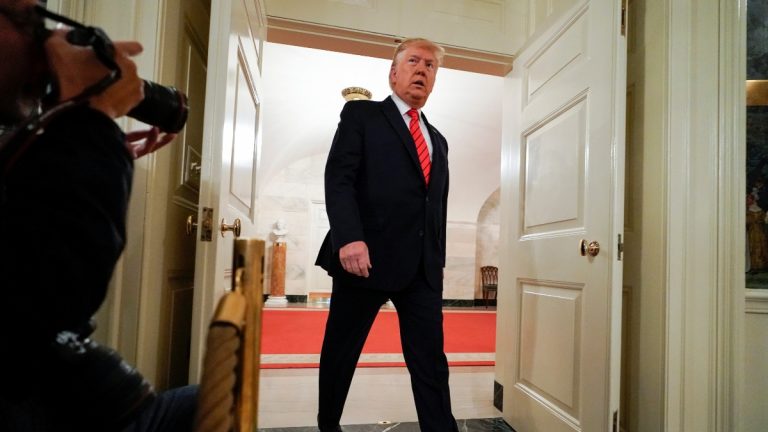 Shafaq News/ U.S. President ,Donald Trump has faced a lot of international criticism since his withdrawal from Syria and his abandonment of the Kurds in facing Turkey; Throughout this period, he was looking for an opportunity to enhance his personal image before the world, which was killing radical Islamic State leader ,Abu Bakr al-Baghdadi.

Trump announced on Sunday that the U.S. operation in Syria had succeeded in killing Abu Bakr al-Baghdadi, but that there were “three things particularly interesting in this announcement,” according to the Washington Post.

"Perhaps the most striking thing about Trump's announcement of the operation was the amount of detail he gave, which was far more than we used to make such announcements," the newspaper said.

"Trump talked about how long he knew about the operation, when he attended the meeting, how it happened and how everyone died, including my wife and al-Baghdadi's children. He also gave some details of the deadly operation."

Trump said that “U.S. forces killed al-Baghdadi in a tunnel with three of his sons.” The president also mocked Baghdadi, who called him a coward. “I don't want to talk about it, but he was scared, crying and screaming all the time before he detonated an explosive vest he was wearing.” According to the newspaper.

In the hours before the press conference, the Kurdish-led Syrian Democratic Forces (SDF) said it was “a joint operation with the United States”.

However, Trump played down the role of Kurds allied to the United States, who had borne the brunt of the recent U.S. withdrawal from northern Syria, and portrayed their role in the process as auxiliaries.

When Trump first thanked the others, he mentioned Russia first, then Syria, Turkey and Iraq, but added that “the Kurds provided certain support for the process”.

Later, Trump said at the press conference that “Russia was the biggest supporter of the process,” saying it was “fantastic” and that Iraq was “excellent”.

"We told them we were coming and thanked us for telling them, they were not aware of the mission," Trump said.

However, the U.S. president said he did not tell House Speaker ,Nancy Pelosi, a California Democrat, because he was worried about leaking sensitive information about the process.

Prior to the press conference, there were reports that Trump did not notify the chairman of the House Intelligence Committee, Adam Schiff, who is the chairman of the Trump Accountability Inquiry, and a member of parliament has access to such operations.

Trump seems to suggest that he trusts Russia more than the Democrats in Congress in keeping this information secret, which would be the focus of much discussion in the coming days.

He also seems to prefer Russia over the Kurds, although Russia did not actually participate in the mission of its own choosing, according to The Washington Post.

Bragging about the operation

The Newspaper said that “Trump was not open at first about how much credit he thinks he deserves, but as he answered questions his goal began to become clear, as he seemed to hint repeatedly to the idea that killing al-Baghdadi was a greater moment than killing Osama bin Laden in 2011 under the leadership of former President, Barack Obama, who then accused Trump of stealing credit in the operation. ”

"This is the biggest goal we have ever eliminated," Trump said on Sunday at a news conference. "This is the biggest and worst goal ever. Osama bin Laden was a big target, but he gained importance with the 9/11 incident while Baghdadi built a whole state as he described it. ”

Trump also repeated his claim that he had warned people of bin Laden attack in a book a year before September 11, 2001 attacks.

Trump's plan to monopolize al-Baghdadi has emerged in a specific statement that he intends to use the process in the coming days and months to boost his image. “I didn't get any appreciation for my warning from bin Laden, but no problem,” he said. I never get credit, and here we are. ”

ISIS is bigger now than when it first formed, and Trump's conflict with Iran could give it a boost